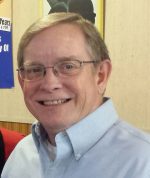 Greg is in his second stint with KROS.  He worked for the station from 1996 – 2004 and returned in November 2007. Greg is on the sales staff and does a few on-air interviews, commercial production and remote broadcasts.  Greg also organizes the KROS Bridal Fantasy and helps with the Plus 50 Living Fair and many other station promotions. Greg is a Fulton, Illinois resident. He graduated from the Fulton Schools, Mt. Saint Clare College and was a Speech Communications Major and Theatre Minor at Illinois State University. Greg has been involved in several community organizations including the Macomb Community Theatre, Alzheimer’s Association, American Heart Association and he has served on the Fulton Chamber of Commerce Board of Directors as President for five years, the Fulton Township Committee, a trustee on the Fulton Township Board and a board member of FACE (a Fulton community endowment organization). Greg retired as owner/operator of the Party Town Mobile DJ Service in 2017.

Share on FacebookShare on TwitterShare on Linked InShare by Email